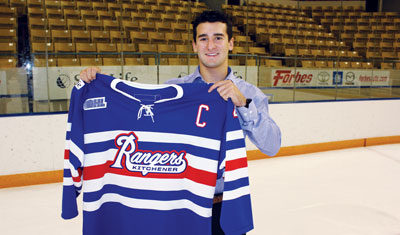 Former Kitchener Rangers captain Ben Fanelli stepped on to the ice at the Aud for a team scrimmage.  Only this time, instead of the familiar blue and red, he was in black and white. 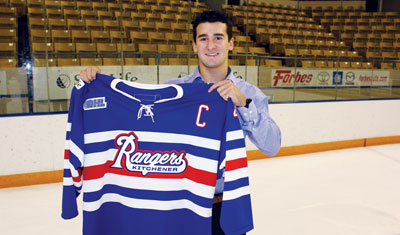 Ben Fanelli of the Kitchener Rangers in 2013

From Josh Brown at the Waterloo Region Record:

KITCHENER — Ex-Kitchener Rangers captain Ben Fanelli was back on the ice at the Aud, only this time he was holding a whistle.

The 21-year-old former defenceman, who graduated from the Ontario Hockey League after spending five years with the Rangers, was working as a linesman Friday during the team’s training camp scrimmage as he pursues a possible career as an on-ice official.  “It’s a tough job,” said the Oakville native. “You’re the third team out there. It’s hard to see everything at one time so you have to rely on each other to do it.”

Fanelli was invited to [the NHL Exposure Officials] camp held in Buffalo a few weeks ago after he was identified as part of a group of former players with potential to wear the zebra stripes. And this week he got his first taste of action by working the lines at the Aud for Rangers’ scrimmages Thursday night and Friday morning.

“It took me a while to get to the point to see refereeing as a possibility,” he said Friday. “As a hockey player you never think you’ll be on that third team out there. But after experiencing the (officials) camp and the camaraderie the guys have … I felt it was something I could be doing in the future.”

Fanelli is keeping his options open. After all, he’s just months removed from his OHL career. He’s still studying communications at Wilfrid Laurier University and running Head Strong: Fanelli 4 Brain Injury Awareness, a program that raises the profile of brain injuries. But with his hockey playing career on hold — he hasn’t officially retired — he couldn’t ignore the officiating olive branch when it was extended. “It’s humbling,” he said. “I went into it with an open mind.”

So there he was Friday morning at the Aud, lining up at the faceoff circle ready to drop the puck. It’s quite a change from his days patrolling the blue-line. He heard a few playful chirps from former teammates and coaches but looked right at home in his new role. “It seems like a pretty cool gig,” he said. “It’s definitely different than playing but it’s like you’re in the game too.”

Five years ago, Fanelli was knocked out of the game when he suffered a serious head injury after he was run into the end boards during a Rangers’ game at the Aud in his rookie season. Doctors told him he may never play hockey again but the determined rearguard fought his way back to play his final three seasons of junior eligibility. His community work has led to a myriad of post-hockey opportunities and the refereeing angle is the latest to pop up. Fanelli’s next step is to climb the officiating ladder by working his way from the bottom up.

“I’ll take advantage of this opportunity and see where it takes me,” he said. “It should be another exciting journey.” 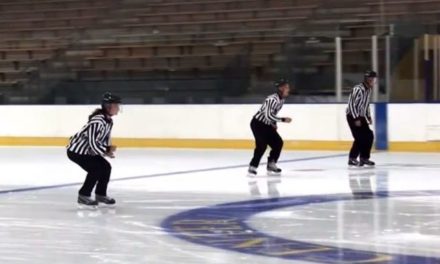 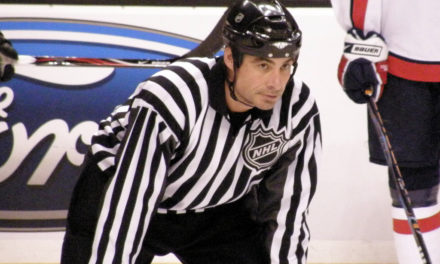 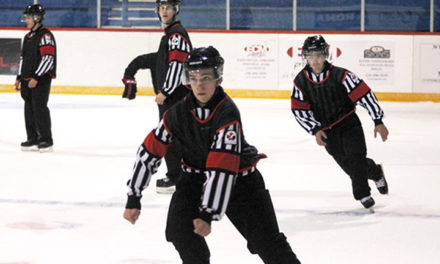 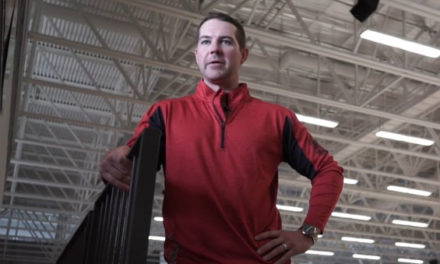 Referee Jon McIsaac Made Many Stops on Road to NHL