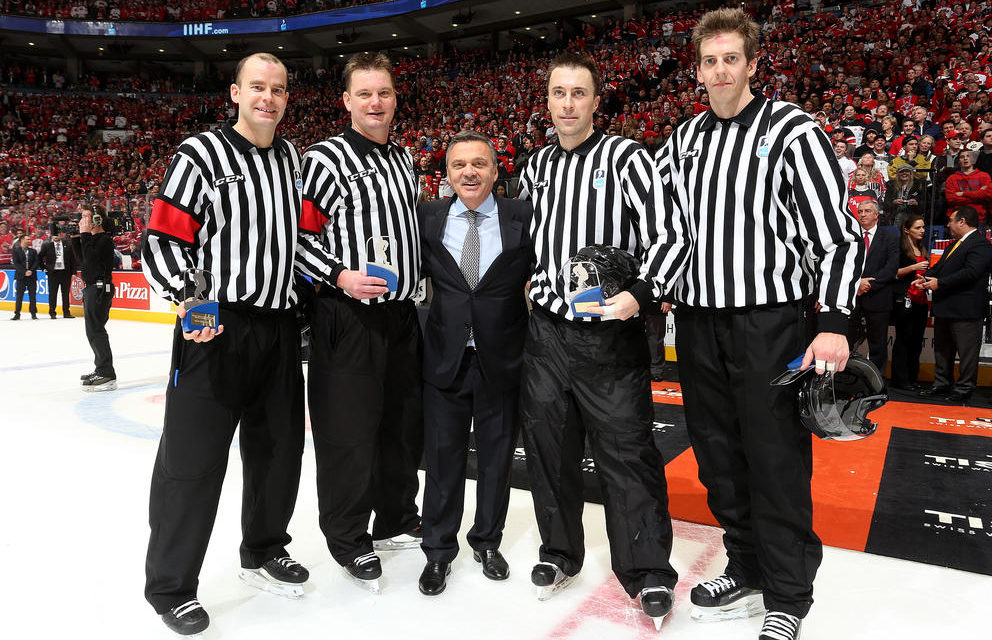 Referee Tobias Wehrli has worked a number of high profile international events, including three straight World Championships.  He’ll be stepping up his game – and his responsibilities – as Head Referee of the 2015 Spengler Cup tournament.

“I am looking forward to my participation at the Spengler Cup – just as if I were to ref a World Championship final”, says Tobias Wehrli.

SpenglerCup.ch posted an interview with Wehrli just prior to the start of this year’s Spengler Cup tournament:

You just arrived from work. Is it easy to coordinate your career with your duties as referee?

Tobias Wehrli: My life is made up of 3 worlds – career, hockey and my private life. It does take a lot of coordination and compromise to reconcile everything. I am convinced that the experience I accumulate as a referee helps me in my career. The main elements are similar: decision-making, communication, acknowledgement of mistakes and team work!

It will be your first assignment as a referee at this year’s Spengler Cup. In six previous tournaments, you participated as a linesman. Which assignment was the most impressive for you?

Wehrli: The first assignment was the most impressive. Together with a good friend of mine, I began my career as a referee when I was 15-years old. He was convinced that we would one day ref the Spengler Cup.  When he retired, he gave me a golden whistle as an incentive. Ten years later, I got the opportunity. It was fantastic. Of course, I had the golden whistle with me even though I no longer used it. After a 5-year break, I will be returning to the Spengler Cup as a head referee. I am looking forward to experiencing that wow-effect just as during my very first assignment.

Listening to you talk, I get the feeling that you really enjoy every moment as a referee.

Wehrli: Since my transfer from linesman to head referee, it has been a dream, especially the last 24 months. It began in April 2014 with my assignment to the U18 world championship final. This year, I was given the opportunity to not only ref the U20 world championship but also the world championship final in Prague. Followed by the request to ref the Spengler Cup. It couldn’t be better. This is why I am so happy, satisfied and a little proud to be able to participate.

Would you want to turn your activity as a referee into a career?

Wehrli: Never say never. But should my career and hobby continue to develop as they have, then I am 100% satisfied with things as they are. While actively fulfilling my hobby, I am able to get away from my job and during my job, I am able to recharge my batteries for my activities as a referee.

What distinguishes you from a professional referee?

Wehrli: The professional referee has more regeneration time. After my assignments as referee, I often only sleep a few hours so that I can catch a 5 o’clock train from Geneva, for example, back to my workplace. Sometimes I am tired, but always extremely satisfied. As long as I can coordinate work and hobby in this fashion, then I am very happy to continue as such.

On the average, you referee 2-3 games a week in addition to international tournaments. Somewhere in between you also have to schedule various training sessions?

Wehrli: During the winter, it is my goal to either be on the ice 3-4 times a week or to do my strengthening and stability exercises. The training during the Summer is even more intense. The Federal Sports Office (BASPO) based in Magglingen, checks our form with performance testing 2-3 times a year. The comparisons show, that I can continue to improve. Our executive training crew has become very professional since the addition of Beat Kaufmann and Brent Reiber. The pressure on the referees has increased over the last few years due to video analysis.

Even though you are an amateur ref, you were given the assignment for the world championship final. What other goals do you have?

Wehrli: Well, one really should retire after such a world championship final, but it is just too great! I am in the middle of a learning phase and look forward to each new game. My goal as a linesman was to go to the 2010 Olympics – unfortunately, I was unable to achieve that goal. The next Olympics are in 2018. The chances of an assignment as an amateur are almost non-existent. But one can hope!

Following your fantastic assignments of this past year, is the Spengler Cup the icing on the cake?

Wehrli: The Spengler Cup is the highest achievement one can reach in Switzerland. One meets interesting people, athletes from other sports and even members of the Swiss Federal Council. The Spengler Cup is a family event with a fantastic atmosphere. I am looking forward to my assignment just as if I were to ref a world championship final. I am also looking forward to working with the other referees, especially Mikko Kaukokari from Finland. We worked together at the U18 world championship final. He is a great guy. A great addition to the referee team will also be Greg Kimmerly from the NHL and Terry Gregson, our supervisor.

You will surely profit greatly from these NHL characters at this year’s Spengler Cup?

Wehrli: Absolutely. We always profit from one another. Terry Gregson is a remarkable person with an unbelievable amount of experience. He spoke to me before the world championship final. His words were very impressive.

You led the game between Russia and Canada at the world championships in front of 17’400 spectators. In Davos, it will be approximately 7’000 fans. How do you experience the atmosphere in the arena?

Wehrli: As a linesman, one can join in the atmosphere – we were even able to sing along with a few of the fan’s songs at my last Spengler Cup. As a head ref, this is not (yet) possible. It doesn’t matter if there are 20’000 or 3’000 spectators, the tension is the same. One can surely enjoy a moment or two, but during the 60 minutes on the ice one must focus without exception on the game.

Do you think there will ever come a time when you can enjoy a game from A to Z?

Wehrli: Yes and no. There will always be a certain amount of tension. The pressure has increased with the use of so many cameras. They are a useful tool for improvement, but are also merciless in the analysis. Experiencing this tension and surmounting the challenge well, is the positive feeling we referees enjoy after the game.

How is the mutual understanding amongst yourselves?

Wehrli: The ice-hockey players and the referees are together responsible for the show on the ice. This is something that we can continue to work on, but we are definitely on the right path regarding communication. I believe that the longer a referee is in the league, the more respect he earns. An example of this is Danny Kurmann. Through his long-standing top performance, he has earned the highest respect of players and coaches – it is very difficult to get to this point. It is great to profit from one another through these experiences and to continue to improve from each and every game.

Best of luck to Tobias Wehrli and all the officials working the 2015 Spengler Cup.
Follow @spenglercup2015 for tournament updates. 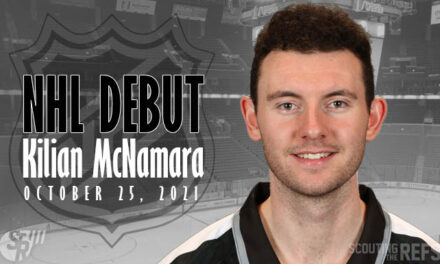 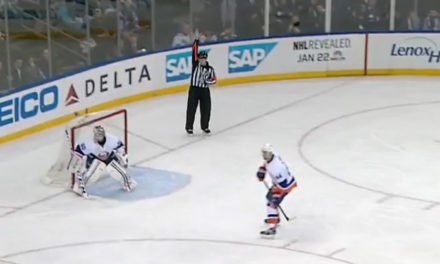 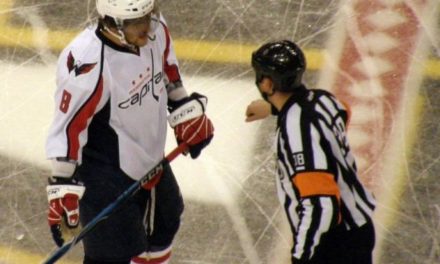