SKA St. Petersburg took a 3-0 lead in their playoff series against Severstal Cherepovets, thanks to an overtime victory on a goal that was clearly offside.  Even a second look by the officials failed to overturn Jarno Koskiranta’s game-winner.

The officials disagreed, offering the following response: “After the video, it is determined that there was no offside position.”

An additional explanation was offered by the KHL refereeing department, as reported by SportaCentrs, which looked to find fault with the Severstal arena’s technical equipment.

“While reviewing the play at the request of the coach, the referees used video provided by the technical services of the Cherepovets arena. The video did not allow the referees to clearly determine if the puck left the attacking zone. Since the video was inconclusive, the initial call on the ice by the linesmen was upheld.”

“The KHL has repeatedly appealed to clubs with urgent requests to install [blue line cameras] to clearly determine the position of the puck at the right time.”

“The video made by Severstal and distributed by the club to the media [of the offside play] was not available to the referees at the time of the decision.”

This was not the only officiating controversy during the playoff series between SKA and Severstal.  Game 2 – a 4-3 overtime SKA win – saw St. Petersburg play a full 67 penalty-free minutes. Cherepovets, on the other hand, was assessed 24 minutes in penalties, including two minor penalties in overtime.

Sovsport’s Slava Malamud laid out an epic Twitter thread to provide background on what he believes is a far-reaching conspiracy:

So, here is what’s happening in the KHL, for those who still can’t quite grasp the banality of evil, Russian style. The entire league has been set up this year to allow SKA to win. It’s Putin’s team, this is Putin’s election year, it’s chock full of OAR Olympians.  SKA is allowed to ignore the salary cap, its payroll is 6 times that of an average team, it has dibs on every star who considers the KHL. Most of its players are rabid Putin supporters who took part in his campaign rally last week. I repeat: SKA must win. It’s not an option.

[15 of the 25 players on the Olympic gold medal-winning OAR squad play for SKA St. Petersburg]

There is a slight possibility of a loss, if the opponent is CSKA, owning to the Moscow team’s legacy and the “patriotic value” of their potential victory, but it’s a small chance. Putin wants SKA, and SKA it shall be… The KHL even has an official explanation for this. It goes like this: “Allowing all the best players to concentrate in one team has created unique chemistry that transitioned seamlessly to the Olympic squad. Making the KHL season easy for them has safeguarded against injuries and bad morale. This is why we won the gold”.

Yes, the KHL isn’t even denying that the entire 2017-18 season is fake. They are simply claiming that sacrificing it for national team’s success is totally worth it, “for the honor of the Motherland.” They are citing the Soviet model, when the domestic league was also a sham.

However, there is a problem… In the first round of the playoffs, SKA has drawn Severstal Cherepovets. It’s not a problem because Severstal is a strong opponent. Not at all. It’s an eternal minnow, which has been bad for so long, the league is considering it for contraction.  And this is precisely the problem. Severstal has nothing to lose and nothing to fear. If they bow out to SKA easily, it will prove the league’s case and the axe will swing. Giving SKA trouble may at least create enough of a scandal to make the league reconsider.

Severstal is exactly in the same position as the Charleston Chiefs from Slapshot. Trying to stave off the seemingly inevitable demise by being a big story. Even Putin’s potential wrath isn’t a deterrent. There is also the fact that it’s totally unfair to contract Severstal.  Yes, it’s a struggling team with bad finances, but it’s had an incredible season, all things considered. Its fans are amazing. Cherepovets is basically Hamilton, moved way up north and stripped of all its famous Hamilton charm. It’s steel mills, hockey, and frozen wasteland.

So this brave little team from a hockey-mad industrial deathscape is being fed into SKA’s maw as a playoff appetizer. And it’s totally refusing to go down easy! If this wasn’t Russia, where evil always wins, it would’ve been Hoosiers, Miracle and Bad News Bears all in one.

But this is absolutely Russia, so this is what transpires. As SKA, most of its roster badly hung over after Putin’s big election bash the day before, is about to lose Game 1, the refs reach for their whistles and blow hard. The PIM count is 24-0 in Severstal “favor”…

SKA finally connects on the PP to go up, 3-2, only to see Severstal tie it in the last minute. No problem, though. The refs give SKA two more PPs in overtime, until they finally score. In Game 2, Severstal keep it close for a while, until eventually succumbing

But in Game 3, with home fans going nuts, Severstal is giving SKA all it can handle. Now, one would think the refs would give this one to the hosts, just to make things plausible. And at least the PIM count is even this time. But the pesky underdogs take it to OT again!

Then, [the offside overtime goal] happens.

If you saw this to the end, you will notice a rather obvious case of offside. The Severstal coach, a cynical, sarcastic dude whose interviews are borderline subversive and make it obvious that everyone knows what’s going on, challenged the goal. The play was reviewed.

The replay officials saw exactly what you just saw. They conferred for several minutes and announced their verdict: good goal… Forget making this look plausible, Severstal has become more trouble than it’s worth. Better get them out of the way safely. This was too much…

The above video was posted by Severstal’s official Twitter account. The word “winning” in “game-winning goal” was in parentheses. The fans’ mentions are untranslatable. This, again, is all out in the open. Everyone knows what’s going on. Everyone! And nothing can change.

Putin’s pleasure and “the Motherland’s honor” are what counts. SKA must win. It’s the priority… But the last frame of Severstal’s little protest video declares, “Hockey Is More Important.” In today’s Russia, this is as big of an anti-Putin protest as one can be allowed. Probably, the most tragic thing about it is that Pavel Datsyuk, an amazing player and not in any way a politician, is having his name soiled with this by playing for SKA. But that’s what you get when you dance with the devil… Actually, forget it. The most tragic thing is that everyone in Russia knows what’s going on. The fans, the officials, the media. It’s out in the open. And the people who have made it happen (all KHL bosses are Putin’s close friends) have already announced that the system has proven effective and should continue. “For the glory of the Motherland”

The KHL praised the game as “lively testament to how hard Severstal pushed its illustrious opponent” and celebrated SKA’s ability to “conjure a way to win in difficult circumstances.”

Translations have been leveraged for this report, with minor edits made to improve readability while maintaining intent of the source material 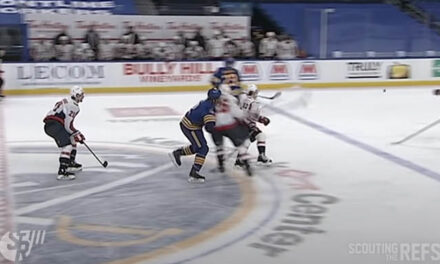 No Suspension to Caps’ Dowd for High Hit on Sabres’ Staal 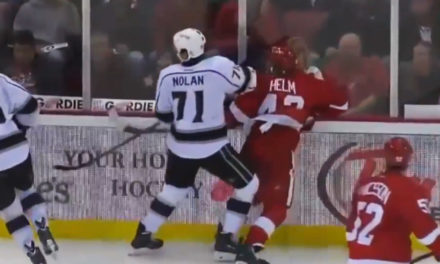 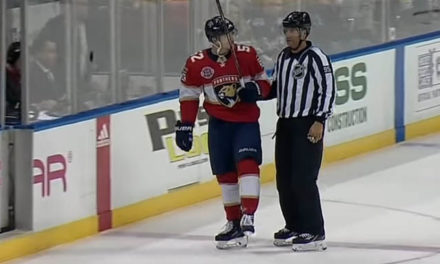 Misconduct for Panthers’ Weegar After Nearly Hitting Linesman With Stick