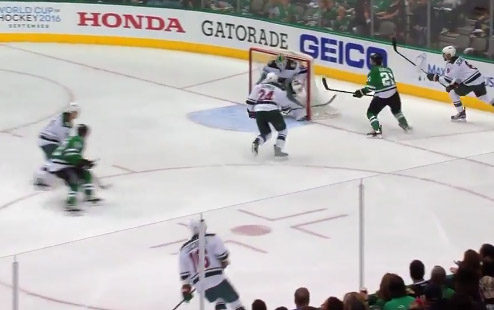 Dallas Stars forward Antoine Roussel opened the scoring of Game 2 against the Minnesota Wild without ever getting a stick on the puck.

Minnesota’s Marco Scandella’s clearing attempt hit Ales Hemsky and deflected behind the net, where it bounced off Roussel’s skate and over the net.  The Goldbergian chain of events ended with the puck hitting the back of Wild goaltender Devan Dubnyk, who then bumped the net off its moorings as the puck crossed the goal line.

Brad Meier immediately – and enthusiastically – waved off the goal.

After further analysis by Hockey Operations, the official ruling came down.

“After video review it was confirmed that the puck legally entered the net. We have a good goal.”

So what’s the deal?

Let’s break it down in order.

The puck was clearly deflected by Roussel’s skate but did not appear to be propelled by it.  Based on that, there’s no distinct kicking motion with which to disallow the goal.

How about that goal displacement?

The net obviously ends up off its moorings by the end of the play.  Here’s what Rule 78.4 has to say about  the position of the goal:

The goal frame shall be considered in its proper position when at least a portion of the flexible peg(s) are still inside both the goal post and the hole in the ice.

The flexible pegs could be bent, but as long as at least a portion of the flexible peg(s) are still in the hole in the ice and the goal post, the goal frame shall be deemed to be in its proper position.

The goal frame could be raised somewhat on one  post (or both), but as long as the flexible pegs are still in contact with the holes in the ice and the goal posts, the goal frame shall not be deemed to be displaced.

Video review determined that the puck crossed the Minnesota goal line in a legal fashion prior to the net being displaced. According to Rule 78.4, “The goal frame shall be considered in its proper position when at least a portion of the flexible peg(s) are still inside both the goal post and the hole in the ice”.

The league made no mention of awarding a goal, which may have also been a consideration on the play.   Since Wild goaltender Devan Dubnyk was the one who bumped the net off its moorings, rule 63.6 may have come into play:

In the event that the goal post is displaced, either deliberately or accidentally, by a defending player, prior to the puck crossing the goal line between the normal position of the goalposts, the Referee may award a goal.

Of course, this in entirely dependent on the earlier determination as to whether the net had been displaced at that time. While it was off the ice, it appeared that the flexible pegs were still in place.

Minnesota goaltender Devan Dubnyk was not pleased with the call.

“It’s not the refs call. He waived it off. You tell me how they come up with conclusive evidence on that play to call it a goal. The ref made the right call and somehow they have enough to overturn it in Toronto. I’m not going to say anymore. It’s crazy to me.”

Dumba on Roussel goal: "I don't know if anyone can really riddle me how that's a goal in the national hockey league, but it was." #mnwild

Even Roussel was surprised at the bounce – and that the puck ended up in the net.

“I was trying to kick it back on my stick,” said Roussel. “It looked like a Crosby goal or something.”

I can’t quite say I recall Sidney Crosby – or anyone else – scoring a goal quite like this one. 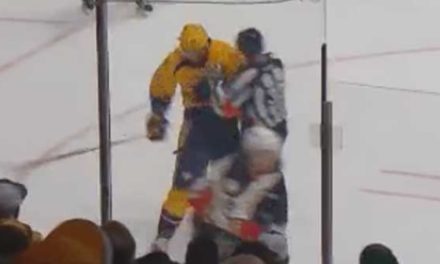 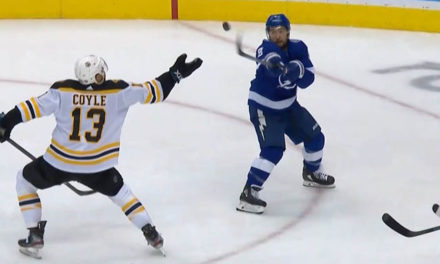 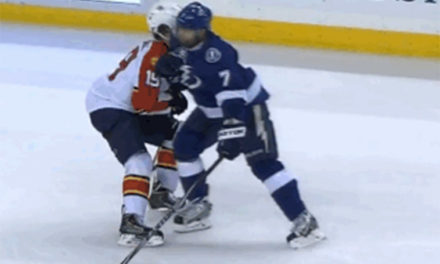 No Discipline for Bolts’ Gudas After Upshall Hit