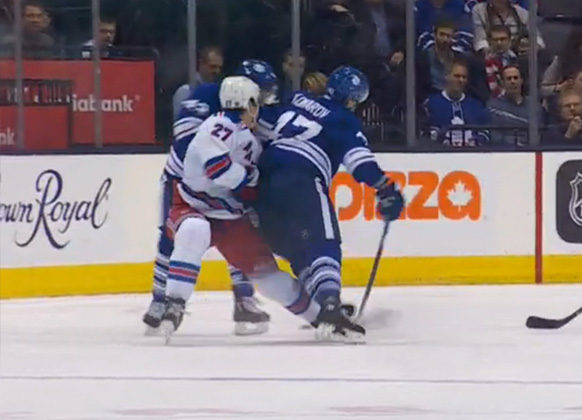 Toronto Maple Leafs forward Leo Komarov has been suspended three games by the NHL’s Department of Player Safety for his hit to the head of New York Rangers captain Ryan McDonagh.

The play happened late in the first period of Thursday night’s game. Komarov was given a match penalty for an Illegal Check to the Head (Rule 48) by referees Chris Rooney and Eric Furlatt.  McDonagh did not return to the game.

Rangers defenseman Marc Staal called it “a brutal, blindside hit to the head.”  He added, “It’s something we’ve seen twice now, a dirty hit. It’s something that needs to get out of the game.”

“Guys have to have culpability and respect for one another,” said blueliner Keith Yandle. “It’s one of those plays you hate to see. You hate to see your friend and your teammate get hit by some one like that when it’s totally preventable. It’s all about having respect.”

While the Rangers players were happy to share their thoughts, their coach was a bit less forthright.

“I’m not going to comment on that [hit],” said Rangers coach Alain Vigneault. “I’m just going to leave it to the league and the referees to do their job. Obviously it was on everybody’s mind, especially considering what happened. We all saw the hit. I won’t comment on it. Hopefully he’ll be all right.”

New York was especially concerned for McDonagh, who was playing in just his second game since returning from a concussion on February 6 that cams as the result of a gloved punch from Philadelphia Flyers winger Wayne Simmonds.

“Twice in less than 12 days McDonagh has been injured with concussions and I do believe the Rangers are calling this one a concussion,” Pierre McGuire told TSN 1050 this morning. “I do believe that Komarov will be suspended.”

Retired NHL referee Kerry Fraser weighed in over at TSN:

Even though McDonagh placed himself in a lower posture to make a play on the puck, there was a sufficient gap for Komarov to recognize his opponent was in a vulnerable position and to either alter his approach or avoid contact. It’s important to note that, given Komarov’s angle of attack throughout, it would appear he was not making any attempt to hit McDonagh squarely through the body.

Rather than hit through McDonagh’s body, Komarov elevated his shoulder and elbow and leaned into his opponent’s head, making it the main point of contact.

We shall see if the Department of Player Safety believes, as I do, that the illegal check to the head delivered by Komarov deserves at least a three-game suspension.

Komarov has never been suspended and has no disciplinary history with the league.  After today, that may change.

“Leo plays hard,” said Toronto coach Mike Babcock. “He is not a dirty player by any means, but I know that their guy was kind of crouched and it’s unfortunate.” 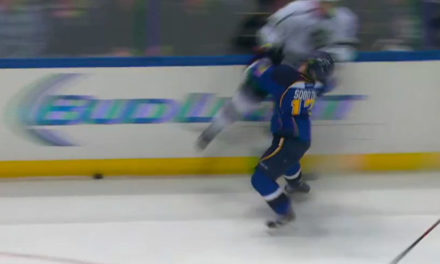 No Discipline for Kings’ Muzzin For Hit on Blues’ Sobotka