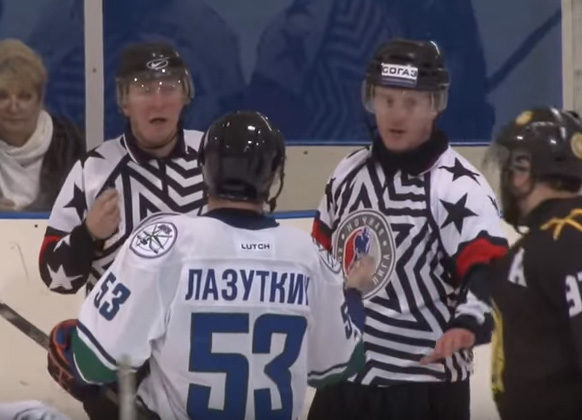 A delayed penalty turned into a brawl last Saturday in Russia’s Night Hockey League during a game between Hammer and Yugan.   When the teams returned to their benches, though, that’s when things got ugly.

It all started with a hit along the far boards less than a minute into the third period. The two players involved started throwing punches as the rest of their teammates joined in.  (Watch as the ref halfheartedly attempts to break things up, then opts to just let ’em go.)

Things settle down, the officials sort out the penalties, and order seems to be restored — until a Hammer’s Sergei Druzhinin gets a bit to close to the Yugan bench.

Chaos ensued, with slashing, spearing, wrestling, and punching all taking place. There’s a few particularly nasty lumberjack-style swings from the bench.  In all the melee delayed the game for 42 minutes.   Play eventually resumed, with Yugan hanging on for a 3-2 victory.

The league reviewed the game, with League Director Alexander Tretiak and Referee-in-Chief Alexander Zaitsev ultimately amending the game sheet to tack on additional penalties.  The final tally was a combined 802 penalty minutes — 602 to Hammer and 200 to Yugan. 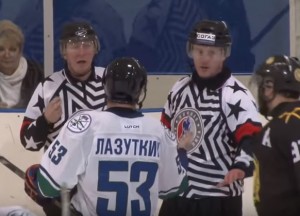 How about these ref jerseys in the Night Hockey League?

“[What happened in the game] terrified even those members of the board of our league that played in North America,” said Zaitsev. “Nothing like this has ever happened in the National Hockey League.”

Amazingly, no serious injuries were reported.  One player received a cut above his eyebrow that required stitches.

“Hockey matches should be decided through fair competition on the ice, not by provoking opponents,” said Tretiak. “Hooliganism has no place in the [Night Hockey League].”

Tretiak called the game a “disgrace… a kind of achievement,” adding, “This is an outstanding case. We have no record of such an amount of penalties in a hockey game at all!”

The record for the KHL is close, with Vityaz and Avangard combining for 707 penalty minutes on January 9, 2010.   The NHL record is 419 penalty minutes from a March 5, 2004, game between the Philadelphia Flyers and the Ottawa Senators.

The Night Hockey League is in its fifth season. It covers the majority of amateur hockey in Russia, with over 700 teams under its umbrella.

(stick-tap to /r/hockey for the original video) 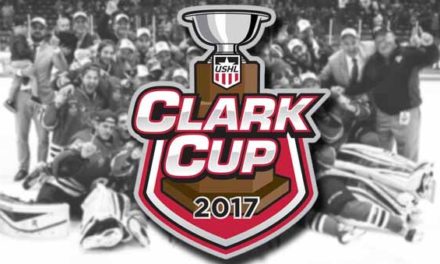 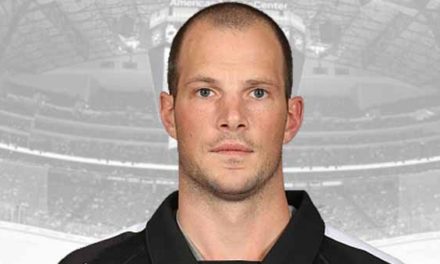 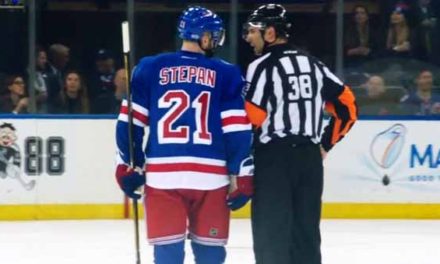 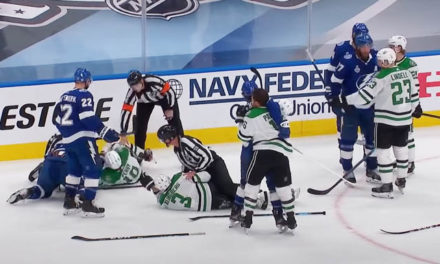