The NHL’s Department of Player Safety has scheduled a pair of hearings after separate kneeing incidents in Sunday’s game between the Toronto Maple Leafs and the Winnipeg Jets.  Winnipeg defenseman Neal Pionk and Leafs center Jason Spezza will both be hearing from Player Safety.

Pionk’s hit came 5:44 into the third period, with the Jets leading 5-3.  Toronto’s Rasmus Sandin fired a shot at the Winnipeg net while cutting to the slot.  Pionk, coming across, lined up for a hit. Rather than deliver a legal body check, Pionk collided knee-on-knee with Sandin.  The Leafs bluelines was slow to get up and leave the ice. He did not return to the game.  No penalty was called on the play.

“It looks to me like it’s a five-minute major. It’s a knee-on-knee. A guy gets carried off,” said Toronto head coach Sheldon Keefe. “Obviously, [the refs] didn’t see it. I think if they see it, they probably would’ve called it differently. The league, I’m sure, will have a look.”

“Should be a 4-on-3, a five-minute power-play in a two-goal game, and it’s not,” added Keefe, ” I just felt at that point, we needed some response.”

Toronto would respond less than two minutes later with a questionable hit of their own.

Toronto forward Jason Spezza delivered a knee to the head of Pionk, who was in a vulnerable position having dove across the ice to bat the puck out of the zone.  Spezza lined up the hit with Pionk already down.  Unlike Corey Perry’s knee to the head of John Tavares back in May, this did not look like an unintentional or unavoidable play.

As with Pionk’s hit, there was no penalty called on the hit.

Pionk is slated for a phone hearing, while Spezza’s will be in-person (via videoconference), allowing the league to offer a suspension of five games or more.

The two teams combined for 52 penalty minutes – 38 of them in the third period – in a game that also saw Toronto’s Wayne Simmonds fined $2,250 for cross-checking.

Referees for the game were Brad Meier and Reid Anderson. Linesmen were Travis Toomey and Ben O’Quinn. 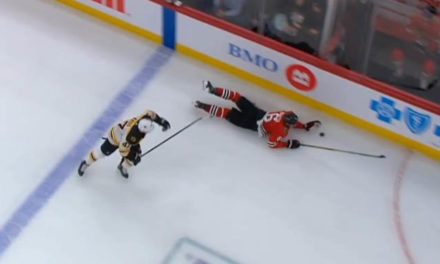 Blackhawks Goal Waved Off After Controversial Whistle For Hand Pass 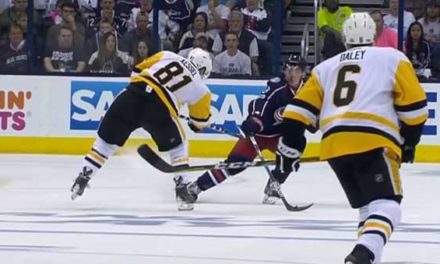 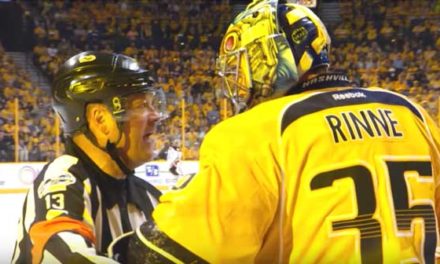