Flyers’ Hart Gets Warning After Gloving Puck Behind Net

Philadelphia Flyers goaltender Carter Hart nearly put his team shorthanded after gloving the puck behind the net in overtime.

Hart gloved it behind the net. He retreated to the crease, eventually drawing a whistle — and a warning — from referee Chris Lee.

“I was just trying to knock the puck down off the glass there and I didn’t even notice it bounced right in my glove,” Hart said. “I didn’t know what to do. I quickly sprinted back to my crease and then got a warning. I’ve just got to be a little more careful next time.”

A minor penalty shall be imposed on any player, including the goalkeeper, who holds, freezes or plays the puck with his stick, skates or body in such a manner as to  deliberately cause a stoppage of play. With regard to a goalkeeper, this rule applies outside of his goal crease area.

A minor penalty shall be imposed on a goalkeeper who, when he is in his own goal crease, deliberately falls on or gathers the puck into his body or who holds or places the puck against any part of the goal in such a manner as to cause a stoppage of play unless he is actually being checked by an opponent.

Typically, some leeway is given to the goaltender in covering pucks just outside the goal crease.  One would expect a warning from Lee, advising Hart to move the puck unless pressured and to avoid covering it outside of the goal crease.  If Hart made a similar play, the penalty would’ve likely been assessed.

The Flyers went on to win the game 4-3 in overtime.

Referees for the game were Chris Lee and Francis Charron. Linesmen were Steve Barton and Devin Berg. 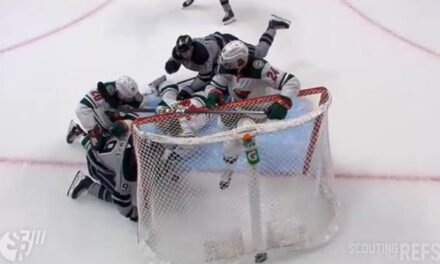 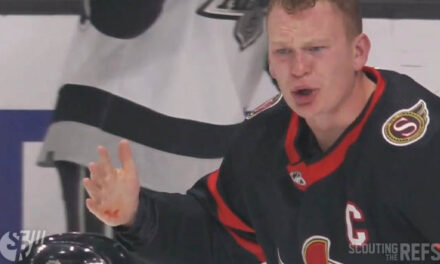 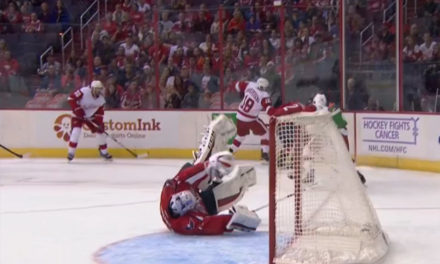 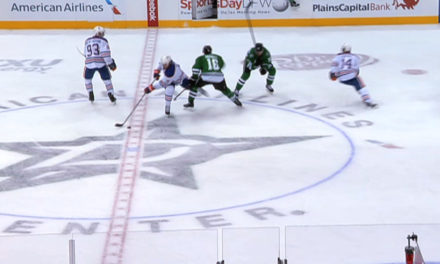