Habs Penalized On Play Wiped Out via Coach’s Challenge

The Montreal Canadiens successfully challenged a Canucks goal, only to pick up a penalty in the process.

Vancouver forward Adam Gaudette appeared to break a 1-1 tie midway through the second period of Tuesday night’s game.  Skating down the right wing, he capitalized on a Carey Price rebound, firing it into the Canadiens’ net.  Habs head coach Claude Julien challenged the play for offside.  A quick review confirmed that the Canucks were indeed offside, with Josh Leivo entering the zone ahead of the puck.


The goal was wiped out.  With a successful challenge, no penalties were issued.

The Coach’s Challenge effectively wipes out anything that happened after the offside.  Anything, that is, except penalties.

[On a successful offside challenge,] the goal will be disallowed and the clock will be re-set to the time at which the play should have been stopped for the missed infraction. In such cases, a face-off will ensue in the ice location where it would have otherwise occurred had the on-ice infraction been called properly.

If one or more penalties (minor or major) are assessed between the time of the missed infraction and the video review that disallows the apparent goal, the offending team(s) (and responsible Player(s)) will still be required to serve the penalty(ies) identified and assessed, and the time of the penalty(ies) will be recorded as the time at which the play should have been stopped for the missed infraction.

That’s right.  The play no longer exists after the Canucks enter the zone, but the penalty still counts and the subsequent faceoff takes place in the Montreal defensive zone. Per the rule above, Nick Cousins went off for slashing at the time of the offside – 8:43.

The Canadiens might have been frustrated by the call, but it was by the book. The goal was wiped out but the penalty stands.

And if they were wrong on the challenge?

The goal would stand, Cousins’ penalty would have been wiped out by the goal on the delayed call, and the Habs would’ve been assessed a bench minor for delay of game on the failed challenge.

Either way, Montreal was coming out of that one shorthanded. The difference was that they wiped out Vancouver’s goal. 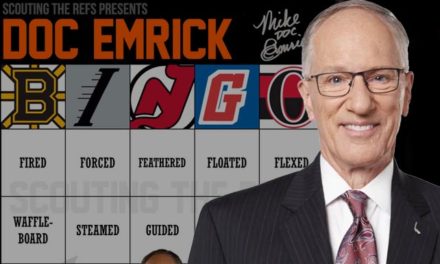 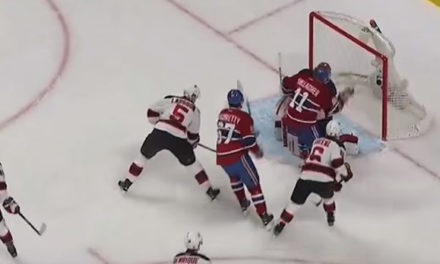