New Jersey Devils winger Jordin Tootoo is the sixth player to be fined for diving this season.

Tootoo was given a warning after a game against the New York Rangers on October 18.  No penalty was assessed to Tootoo in that game.  He did, though, draw a penalty against the Rangers’ Viktor Stalberg which may have resulted in the warning.

His citation came after a second dive, this one against the Detroit Red Wings on January 4.  The play occurred at 9:39 of the third period. No penalty was handed out to Tootoo, nor to Detroit’s Niklas Kronwall, on whom Tootoo was trying to draw the penalty. This one was a bit more expensive, costing him $2,000. It also got his name tacked on to the Convicted Divers List.

Citations are issued by the National Hockey League Hockey Operations Department, which tracks all games, logs all penalties for diving or embellishment and flags all plays not called on the ice that in its opinion were deserving of such a penalty. A Citation is issued once Hockey Operations, through its internal deliberations, is convinced that a player warrants sanction.

New Jersey’s Bobby Farnham has also been cited twice for embellishment, making the Devils the first team this year to have two players fined for diving.

As a reminder, here’s the scale of fines issues to those found guilty of diving/embellishment. 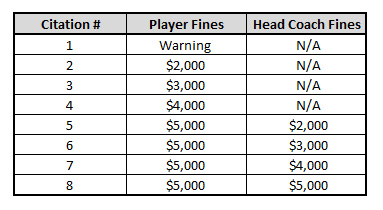 The league reviews all possible embellishment situations and may consider additional dives that were not penalized during the game. They may also rescind dives called in a game that were later reviewed and determined not to be embellishments.

The NHL’s Hockey Operations department tracks every diving or embellishment penalty called on the ice.  They also review each game to identify possible dives that were missed by the on-ice officials. (In some cases, they even rescind those diving penalties that may have been called during a game. Boston’s Brad Marchand was the beneficiary of such a modification.)