In overtime between the Sharks and Sabres, referee Mike Leggo watched the puck go off the post and correctly waved it off.

After that though, he lost sight of the puck.  Apparently, so did everyone else, including Mike Shanley, the video review judge in San Jose, and the War Room in Toronto.   That had to be the case, because nobody saw the puck clearly cross the line.

Tommy Wingels had the OT winner on his stick… and in the net.

From Harrison Mooney over at Yahoo’s Puck Daddy:

It’s a tough play for the officials, because it happened so quickly, and it happened immediately after a post that looked like it might be in. Focused on making that play, and with Tyler Myers blocking the official’s sight line, it’s tough to see the puck briefly cross the goal line when Tommy Wingels reached out to punch it in.

And, as Elliotte Friedman pointed out in a series of tweets, “neither broadcast had it quickly and BUF’s didn’t show it at all. If ref says no-goal on-ice, I’m not sure how that one is getting caught. Not a great moment…but I can see how it happens. Ugh.”

Ugh indeed. While neither broadcast was quick to the draw and the officials missed it, meaning they weren’t headed for the warm room, it’s still embarrassing for the league when a clear goal like this gets missed. Fortunately for the Sharks, they still got a loser point, but Tommy Wingels earned them two winner points Tuesday night, and in a league, let alone a division, with so much parity, that extra point matters. Tuesday night alone, it’s the difference between first and second place in the league (not to mention a loss to the Sabres, which is embarrassing).

Buffalo went on to win 5-4 in the shootout.

UPDATE:  The league stands by Leggo’s call, claiming that it was correctly waved off due to the infamous Rule 78.5 “intent to blow” clause.   From NHL Senior VP of Hockey Operations Mike Murphy, via the CBC:

“[Referee Mike] Leggo waves it off when the puck hits the post and starts to come to the net as a scramble develops. [In the NHL’s video review room in Toronto] we’re still looking at the puck off the post, then see the play with Leggo approaching net, putting the whistle in his mouth and he waves aggressively.

“Had we called a goal against Buffalo it would have been wrong, because it shouldn’t have been a goal.” 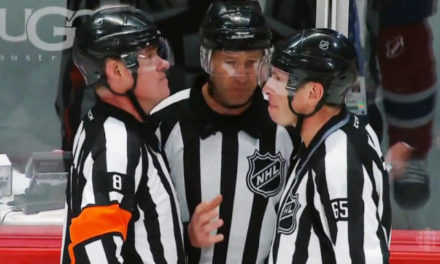 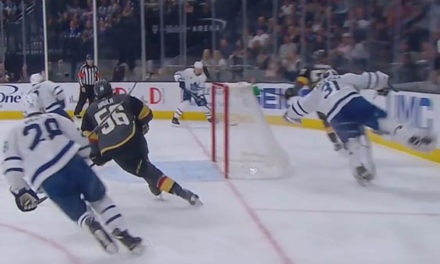 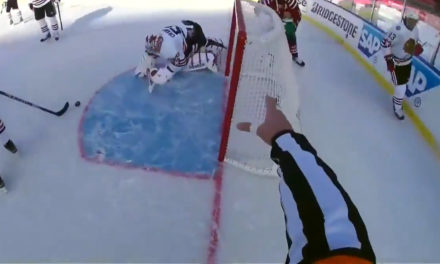